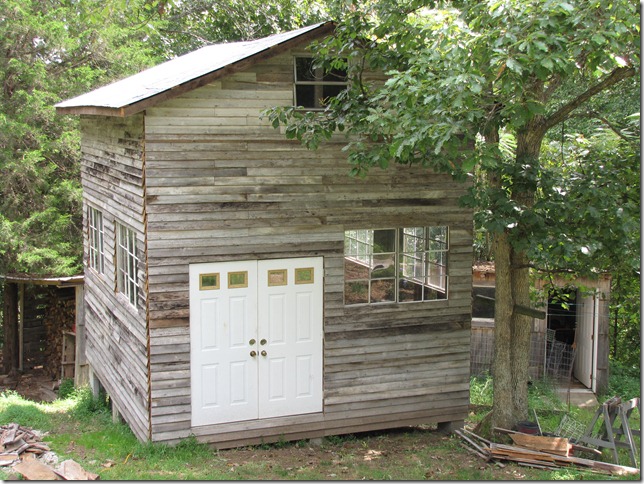 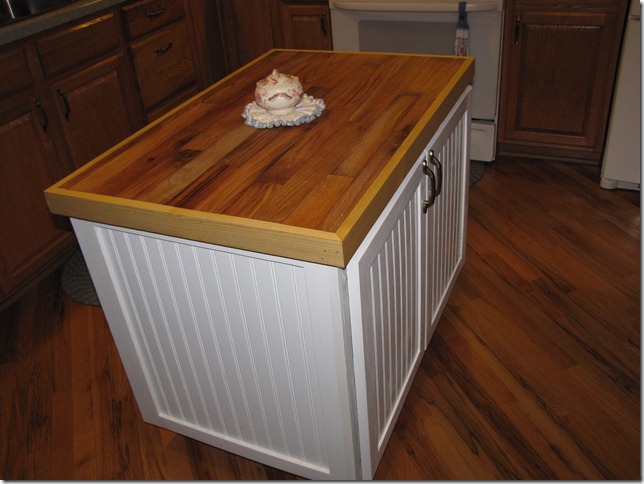 This is just to let you know I’m still around. I had planned on writing tonight. Then started trying to change the set up on here. It was just taking more time than I liked, especially since I’m a bit of a computer illiterate. Finally decided to let the picture stay as it is even though I’m not happy with it. I don’t want it behind the title, yet if I select any other setting the title disappears. So for now it is what it is. I took the picture a couple days ago. We have been seeing these Tiger Swallowtails around quite a lot.

Things have sure changed around here the past couple weeks. The Redbuds are nearly through blooming. The dogwoods still look beautiful, but appear to be fading somewhat. Trees are leafing out. Our maple is putting out lots of bloom, so I’ll be sweeping the deck regularly for a while.

All of the green is such a welcome sight. It has also been warmer…a few days even felt like summer. This week is cooler. Today it rained most of the day. Right now we’re in a break between storms. The second one is forecast as being stronger, so we’ll see. We’re beginning to hear thunder from the distance.

We’ve seen these beauties the past 3 days…Rose-breasted Grosbeak. They show up as they migrate through our area. Haven’t seen a female yet. 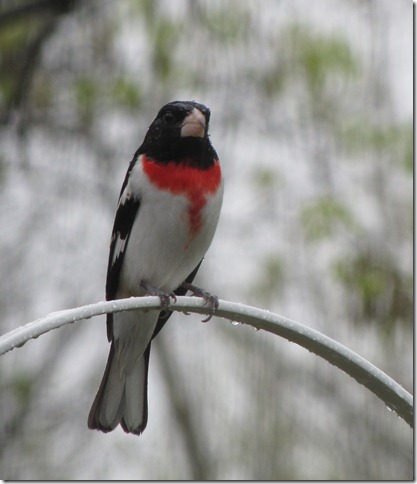 Caught this guy in the Chestnut Oak. Not real clear, but I kinda liked it anyway. And, yes, it’s raining. That didn’t stop the birds. 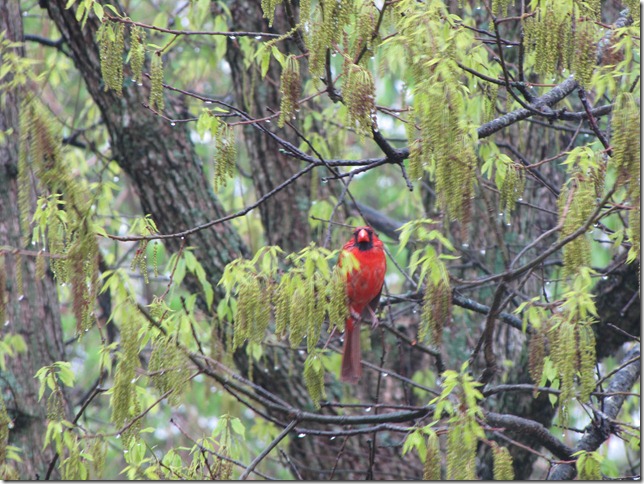 Also wanted to share my gorgeous May Night Salvia that’s beginning to bloom. That’s Garry’s workshop to the right. Our house to the left. 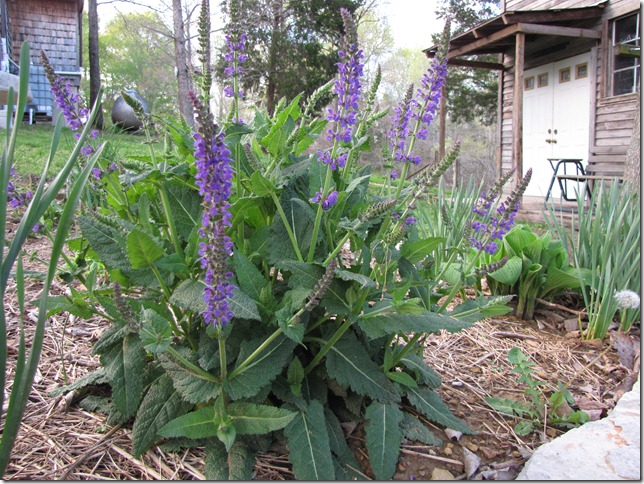 That’s enough as I’m still hearing thunder. Not real close yet, but… We like to unplug things when ever there’s lightening and thunder close. Losing one computer on the farm (our sons) was enough for us to learn.

Today has been a chilly and rainy day. I don’t think the temperature got above the mid 40’s. And with the dampness it just felt cold. Even my grandchildren who tend to go barefooted and in short sleeves whenever it’s above freezing told me it was cold today. We kept a fire going in the stove all day.  It felt good to stand close to the stove and just soak up that warmth. Here’s a photo of the stove I enjoy cooking on. That’s a pot of chili sitting on it cooking…was a few weeks ago. 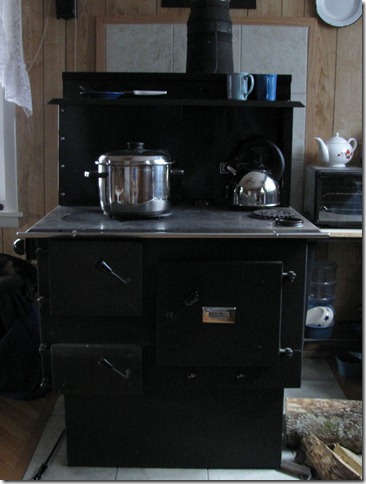 Today I cooked a pot of beans on it. Then made cornbread muffins baked in the wood stove oven. Made for a yummy supper.

Anne and I are planning on going treasure hunting on Wednesday. We’ve been trying to go once a month. This Wednesday is to be a beautiful day weather wise…sunny and 65 degrees.

It is sure looking a lot like spring around here. The daffodils have been blooming. Didn’t realize I had so many until they started blooming. I need to thin some of them and plant in other spots. The yellow of the daffodils is so cheery after a cold, gray winter. The lilacs are leafing out. Noticed growth started on the roses. The phlox are growing, also the blue flax, dianthus, cat mint, mums, salvia, irises, and a number of others whose names won’t come to me. When we have a sunny day and I’m home, I need to take some pictures. 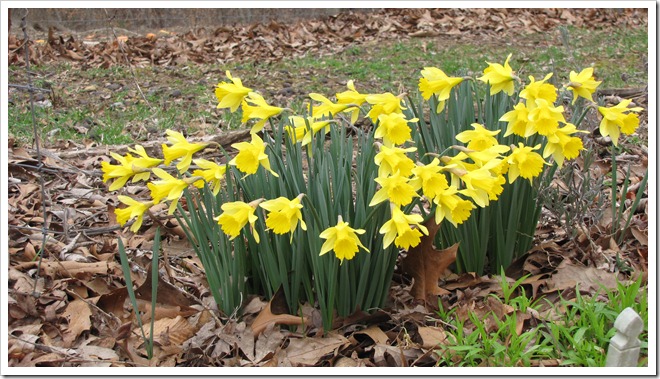 Today is a rainy day. Thankfully it’s not storming or even windy. It’s just raining.

Garry and I just watched a video that I’m sure some of you would enjoy. It’s about Hummingbirds showing things about them I never knew. Here’s a little bit about the actual film…this lasts around 9 minutes. For some reason I had difficulty locating the video on their site, so here’s the link to save you the same frustration. It takes a bit to load. At first I thought it wasn’t going to unless I agreed to donate, so be patient. AND enjoy seeing those amazing little creature up close. It runs approximately 50 minutes.

Here’s a photo of my Hummingbird vine, also know as Cardinal Climber from last summer. Figured since I was on the subject of hummers it’d fit. 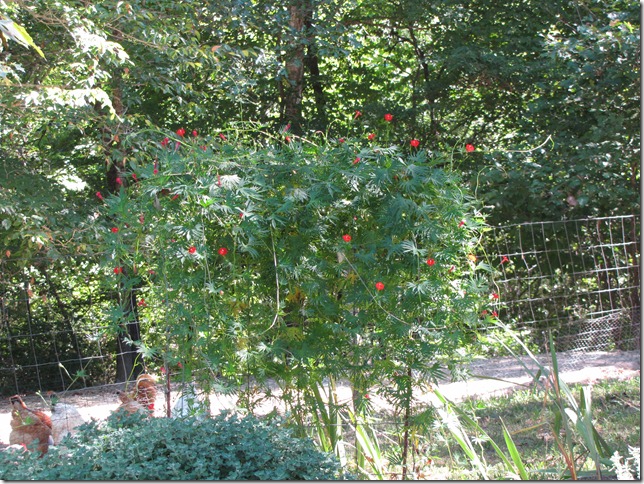 Just thought I’d give you all a link to my daughter’s blog where she is ‘hosting’ a one-time-use $70 gift certificate to use at CSN Stores. I was just looking at all the things they have to offer. One of her requests was to leave a comment with what you’d use the gift certificate for (although you can always change your mind). There are just so many things that it’s really difficult deciding upon any one thing. I looked at a lot of things, still don’t know what I would buy if I win. So go decide what you could use that $70 gift certificate for, then visit Anna’s blog and tell her. You might even consider following her on Twitter and tweeting the giveaway link…I have to figure out how to do that.

Mentioning it in your blog is worth 5 entries. It would sure be neat if one of you won.

Today has been a rainy day. It started raining about 4 this morning, then continued a good part of the day. Right now we’re in a break then another deluge is coming. Our area sure needs the rain as we are several inches behind normal. The last Garry heard it was still 4 inches behind, so this rain may catch us up to at least our normal amounts. Whether it brings the water table back up to normal, I don’t know.

The girls, Snickers and Precious have been being quite the nuisance at night lately. It is so funny how they both get up from wherever they’re sleeping when I start getting ready for bed. They’ll follow me from room to room, or sit in the hallway watching. THEN as soon as the light is out and I’m in bed they start running up and down the hallway, jumping onto the furniture (hear the chairs rock) and wrestling. Thankfully they don’t continue too long. Then along about 4:30 to 5:00 in the morning they’re apt to start up again. If I walk into the room where they are, both will hide from me. Silly girls!! 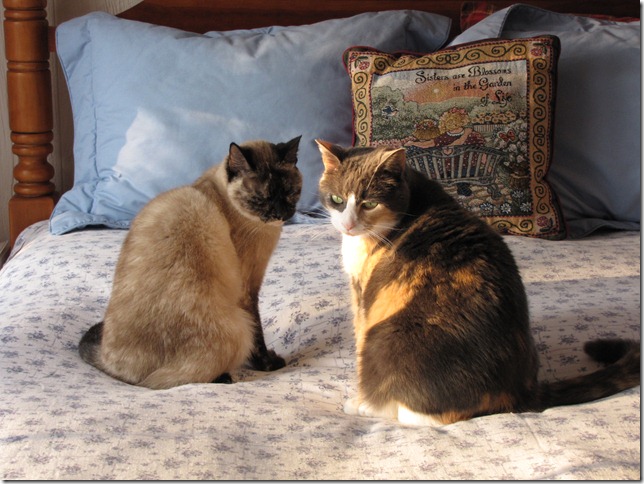 Snickers on the left and Precious on the right.

Okay, it’s time for you to mosey on over to Anna’s and enter for the CSN Stores giveaway.

Today has been one of those dreary gray days except for a few moments when the sun peeked out. The sun showed just enough to tantalize us into thinking we were going to have sunshine. The temperature was in the low 60’s. It was quite windy. I did laundry, but decided to hang it inside because of the wind. I’ve had clothes ‘torn’ off the line on a windy day. And it just didn’t appeal to me to have to rewash OR mend anything.

Saw a picture of a wringer washer that reminded me of when I used to use one. It was quite an adjustment going from an automatic to a wringer. Water, or lack thereof, was the main reason. I did finally manage to acquire a front loading washer which used considerable less water than a top loader. Was I ever thankful for it. At one house we lived there was no water on the property. There was a large cistern that held around 2000 gallons. We had a 500 gallon tank, so hauled water from town to fill the cistern. The winter was the hardest as we couldn’t always get the tank up our driveway and close to the cistern for dumping. Needless to say, we learned to conserve water.

Someone posted a video on Facebook this morning. I thought some of you, especially the cat lovers would enjoy it. I think it’s adorable. 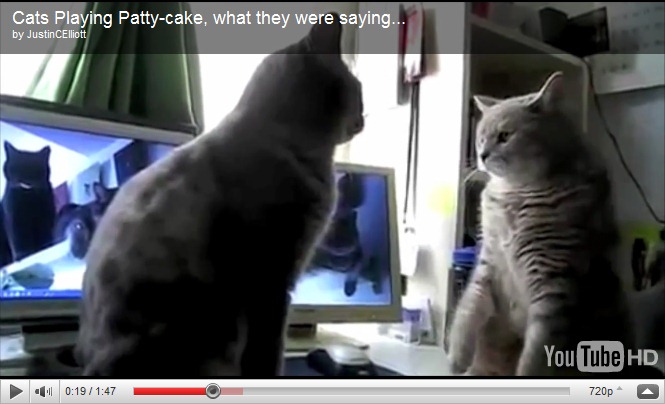 This video should explain why my bird feeders are emptied so quickly. This is a continual thing. Especially when there’s snow on the ground or it’s below freezing. Right now we have snow and below freezing temps. I’ve given them extra feed today, as I just feel so badly when they run out.